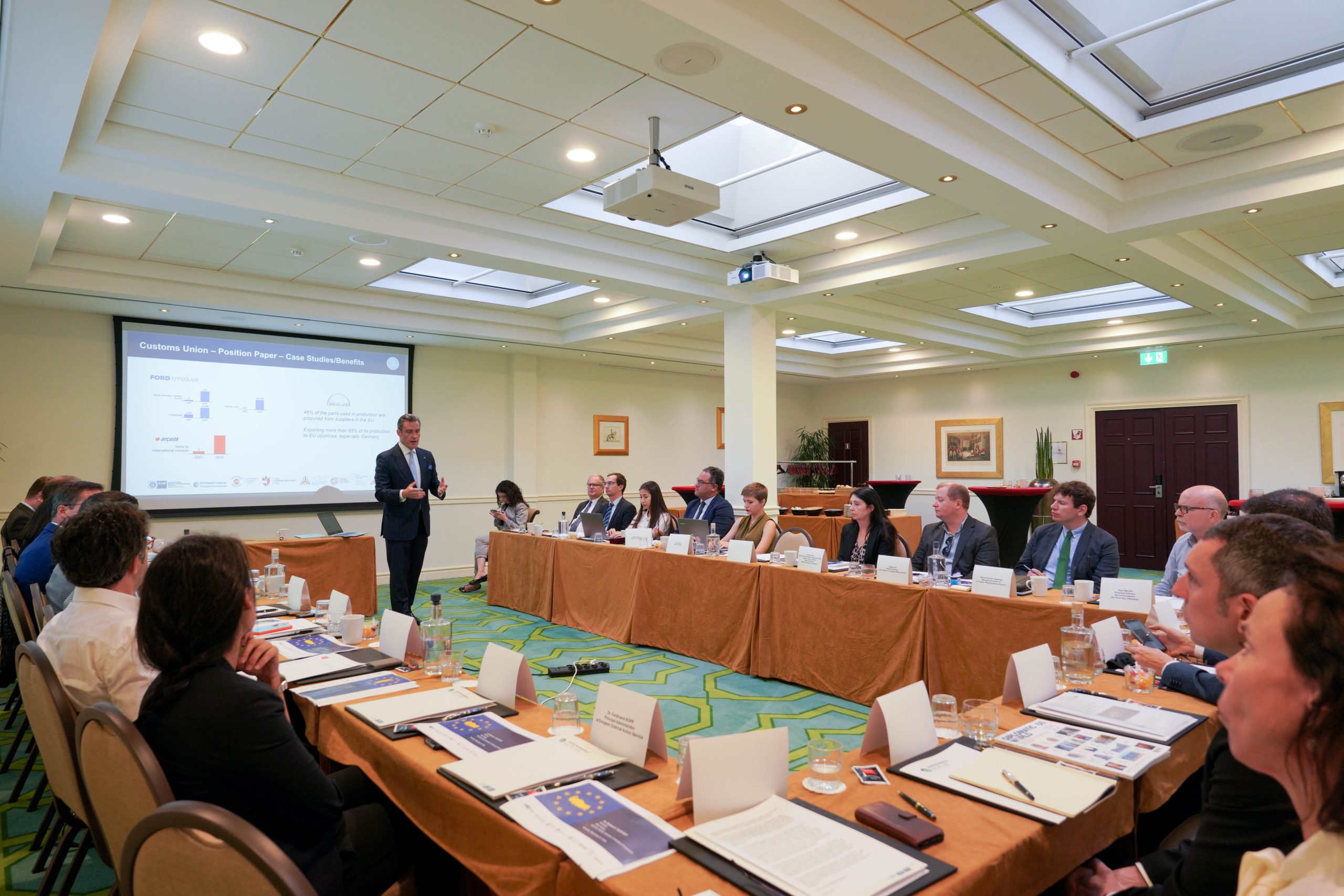 Photo: Aris Setya
Trade relations between the EU and Turkey urgently need a “comprehensive” shake up, according to a high level business delegation visiting Brussels this week.

A review should cover a raft of areas, ranging from services, agriculture and e-commerce to state aid, dispute settlements and public procurement.

The urgency for such modernisation has become more apparent given that initial talks on the issue started way back in 2014. Since then, there has been little or no progress, the business leaders say.

Currently, the General Data Protection Regulation, or GDPR, digital trade and the Green Deal are not part of the Customs Union upgrade agenda but each should be taken into consideration, it was said.

At a press briefing on Tuesday, business leaders from Turkey and EU countries spoke of the potential economic gains for both sides if such a review is undertaken.

European Commission estimates point to an expected gain for the EU of some €5.4 billion, or about 0.01% of the EU’s GDP. Turkey also stands to gain from such a review, up to 1.9% of its GDP.

The visit comprised a delegation from European chambers of commerce who presented a major report on improving trade relations between the  EU and Turkey. Later, they met senior EU officials and civil society members. Among those taking part were the presidents of the Bilateral European Chambers of Commerce and Industry in Turkey.

The ultimate goal of the visit is to underline the economic advantages of further cooperation between Turkey and the EU.

One of the keynote speakers at the briefing, Dr Markus Slevogt, president of the German-Turkish Chamber of Industry & Commerce, told the conference that modernisation of the current Turkey-EU Customs Union (CU) could provide a “catalyst for a stronger relationship” between the EU and Turkey.

However, the agreements currently in place are “outdated and in need of modernisation and reform,” he stated.

Recently, Turkey and the EU have both agreed that their Customs Union, which has played a key role in enhancing their relations, requires a comprehensive modernization. In the wake of global events, there are enormous challenges for the European business sector: the immediate economic ramifications of the Russian invasion in Ukraine; recovery from the shutdowns stemming from the coronavirus pandemic and the continued geopolitical and competitive threats from China, the representatives said.

European companies and their representations, now more than ever, need to keep a close eye on European legislation and market trends, particularly in the fields of big data, the boom in e-commerce, remote workers and the move to greener, more sustainable manufacturing and supply chain processes. There is a new momentum in the European business sector that is constantly reshaping, with innovative practises, increased digitalisation as well as innovative and best practises. Consequently, the briefing was told, the EU, national governments, international organisations and decision-makers are looking for ways to facilitate and enhance trade flows between countries to create supply chain resilience and adhere to the ambitious sustainability goals. Due to such “mega-trends,” businesses in the EU are urged to channel the opportunities in Turkey, especially with regard to the modernisation of the EU-Turkey Customs Union Agreement.

Dr Slevogt said that German companies started in Turkey 160 years ago and had survived Ottoman Sultans, two world wars and an economic crisis. “They survived because, each year, the country’s economy grows by 4.5%,” he said.

“The picture that we have today should be a broader one because Europe more and more is squeezed between US and Asia, Russia & China.So Europe needs to foster relations with countries that are further east and Turkey has a good geopolitical position.

"We believe that this country, as it is, is substantially undervalued but it can be valued.

“Europe was for centuries the bloodiest battlefield the world has seen. So the EU was created, based on trade, to maintain peace. My father told me there is nothing more important than the peace we have in Europe because peace is an anomaly. The only other extended period of peace in Europe was 2,000 years ago. Peace is now a broader concept, including trade relations the EU has with the US and China. Should we also include Turkey in this concept?”

He added, “From an economic standpoint, investors and anyone who wants a future in Europe should look to Turkey. The Customs Union was like a well functioning, 4 cylinder diesel model engine but trade since then has increased over 400%

“Substantial foreign investors have come to Turkey much more than ever before and geostrategic needs show us that the value chain built around Asian countries, be it China or Vietnam, need to be taken closer to Europe.”

He said German trade with Turkey amounted to about €41 bn in 2021, making it Germany’s largest trade partner.

“But there are so many tariff barriers set left and right of the CU, that the engine is no longer up to speed for the current trade levels between Turkey and the EU. We didn't even have the internet when the CU was implemented and now there's e-commerce, customs and agriculture.”

He went on: “Turkey could provide an alternative to Ukraine and Russia when it comes to agriculture products. There is an inverse correlation between war and conflict and investment and trade. The more trade, the less war.”

Veronique Johanna Maria van Haaften, secretary of the Bilateral European  chambers of commerce and industry in Turkey, was another member of the 6 strong delegation.

She said: “All institutions here work on the same objective, which is to strengthen the diplomatic relations between Turkey and the EU. We work together to stimulate trade and to facilitate networking. We hope that this visit will create a solid basis for future dialogue.”

In a Q&A session, the event was told by Dr Slevogt that Turkey is undervalued and that anyone who wants to take advantage of an undervalued asset should position themselves early.

Franck Mereyde, president of the French chamber of commerce in Istanbul, said that assets coming from China and the US take 2, 3 or 4 months and Turkey could be a “closer” supplier.

The benefit of this is highlighted, he said, in the context of how the pandemic posed serious supply issues for Europe.

Out of 40 companies in France, 35 have business in Turkey, he pointed out.

Manzini said that Turkey had never defaulted ever since it was created “so it has proven to be a reliable partner.”

It has taken part in all NATO meetings, “so not only proven itself financially reliable, but also strategic.”

In geostrategic terms,  he said, “a lot of things have changed over the past few years. One is the pandemic and another is the wish to de-couple from China.

“Turkey has kept to higher standards than other countries,” added Manzini.

The session heard that it will not be possible to get to a new CU without Cyprus signing it and, potentially, this could never happen.

It was said that, on this, the joint chambers were lobbying “with everything that we have” and, just before the pandemic, had discussed with former German chancellor Angela Merkel the importance of the CU.

Dr Slevogt said: “We are trying very hard to address the topic. Also,all individual companies are represented in Berlin and try to lobby but sometimes the problem goes much, much deeper than EU bureaucrats wish to acknowledge.”

On the “unresolved issue of Cyprus,” Manzini added that the EU wants Turkey to recognise Cyprus as a trading partner.

He added, “But there is an absence of dialogue and leverage from the EU. If there was a dialogue, and the CU is a good tool to open dialogue, then the EU could regain some power over Turkey. But we all know that until other issues are resolved, we will not start talking. So the EU could have some leverage over other problems, like the rule of law and Cyprus. If both sides get 70% of what they want, it is a good result.”

Further comment came from Mereyde who said: “Improving the CU is not a tool to EU adherence. Our aim is only to improve business. Business is not only money, it is also about people. If we do have a better CU we have more people working for the EU and Turkish companies. These companies have to bring the same values between the EU and Turkey and this is a soft balance. Again, we are here for the CU, not EU membership. The CU will create a better understanding between the EU and Turkey.”

Participants were also asked how religion affects the economy in Turkey.

Dr Slevogt said: “The CU is also an information exchange mechanism that brings change to the country. The more trade you do, the more information gets exchanged between the countries and that is the beneficial spill over of the CU.”

When asked about incorporating the EU’s high standards into an upgraded CU. Dr Slevogt said, “When looking to German investment, and I'm sure it is the same with other countries, they are applying certain sustainability standards. They have to follow these rules. Companies are applying all the standards of the mother companies. Spillover I think is the best term for this for when you are entering certain production sites in Turkey. Foreign investors are also pushing very hard for digitalisation.”

Nevzat Seremet, president of the Belgian/Luxembourg chamber of commerce in Istanbul, added: “Turkey is ready to step up to the standards of its investors with the collaboration of the EU. I think Turkey can overcome all these challenges.”

Speakers were also asked about the realistic prospects for the Turkey-EU agenda, for example, for one year from now.

Replying, Manzini said: “Nobody's standing still. Right after Brexit, the first trade agreement the UK signed was with Turkey. It took weeks to negotiate, not years. We are missing the train! The US is taking it, the UK is taking it, the EU is missing out.”