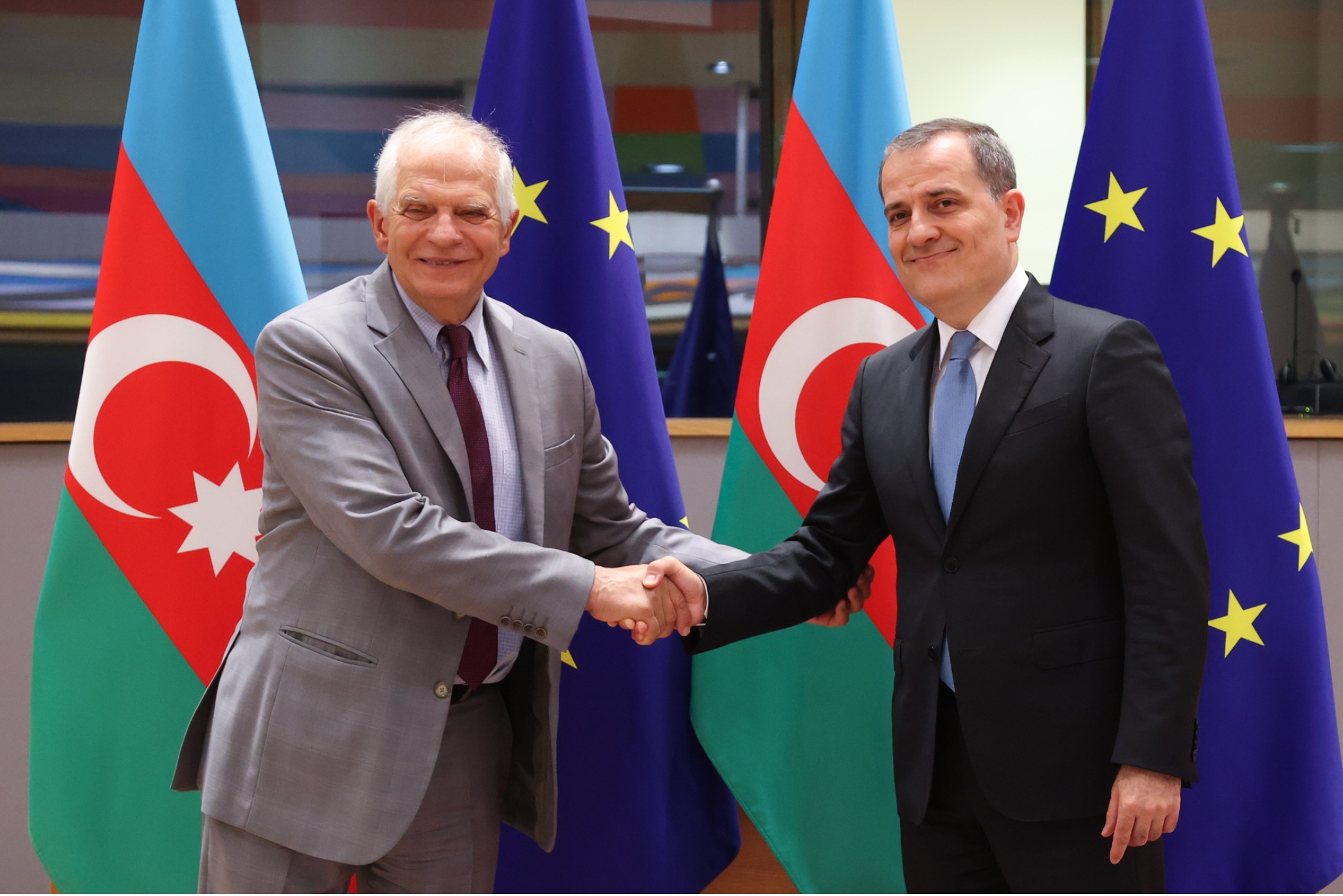 More than ten EU member states have sought new or additional supplies of gas from Azerbaijan, the country’s foreign minister has revealed. Jeyhun Bayramov was speaking at the end of an extraordinary 48 hours in Azeri-European Union relations, writes Political Editor Nick Powell.

Just a day after EU Commission President Ursula von der Leyen flew to Baku to seal a deal to double Azerbaijan’s gas exports to the EU, Foreign Minister Bayramov was in Brussels, as the pace of what has become one of the EU’s most essential relationships stepped up.

The EU’s High Representative for Foreign Affairs, Josep Borell, observed that they were also in a crucial phase of negotiating a new Comprehensive Cooperation and Partnership Agreement, which will support the diversification of Azerbaijan’s economy and help to build a healthy climate for business and foreign investment.

After the meeting of the EU-Azerbaijan Cooperation Council, Jeyhun Bayramov spoke at the
European Policy Centre. He said European demand for his country’s gas meant that they had needed the EU as an interlocutor, to establish priorities.

He outlined plans to increase the 10 billion cubic metres a year pumped to the EU by adding more compression stations to the Southern Gas Corridor pipelines across Georgia and Turkey to Greece, Bulgaria and Italy. But more than ten countries had wanted to book new or additional orders, totalling a currently impossible 30 billion cubic metres.

Azerbaijan has long been a reliable oil supplier to Europe but gas took off at the start of 2021, as the country sought to diversify its customer base. It’s also seeking to diversify its energy sources, with both wind and solar power. Initially, that’s likely to reduce domestic gas consumption and make more available for export.

Foreign Minister Bayramov stressed that the decision to diversify sales was taken several years ago, so even if Europe’s clamour for Azeri gas was a consequence of newly emerged geopolitical challenges in the EU neighbourhood.

“We do what we consider right”, he said. “Not much would be done” if his country’s foreign policy had been based on the possible reactions of third parties. Azerbaijan’s most intractable foreign policy problem had been the long search for a peaceful solution in Karabakh, where Armenia occupied Azerbaijan’s territory for decades.

It’s still not resolved, despite the dramatic recovery of much of the territory in a 44 day war two years ago. That followed what the Foreign Minister described as “not just political provocations but more and more military provocations”by Armenia. Azerbaijan highly valued the efforts of European Council President Charles Michel to mediate but Jeyhun Bayramov said there was a need to be realistic about a conflict with a long and complicated history.

He has just met his Armenian counterpart for talks in the Georgian capital, Tbilisi. The Azeris had wanted to announce the creation of a working group to resolve outstanding issues but the
Armenians were not ready for that.

President Aliyev had said that Azerbaijan was ready to turn the page, despite the devastation in the recovered territory, and Jeyhun Bayramov looked forward to a gradual normalisation of
relations.“Geography is something you cannot choose. We’ve been neighbours for centuries.”

Azerbaijan is Ukraine’s only strategic ally in the South Caucasus