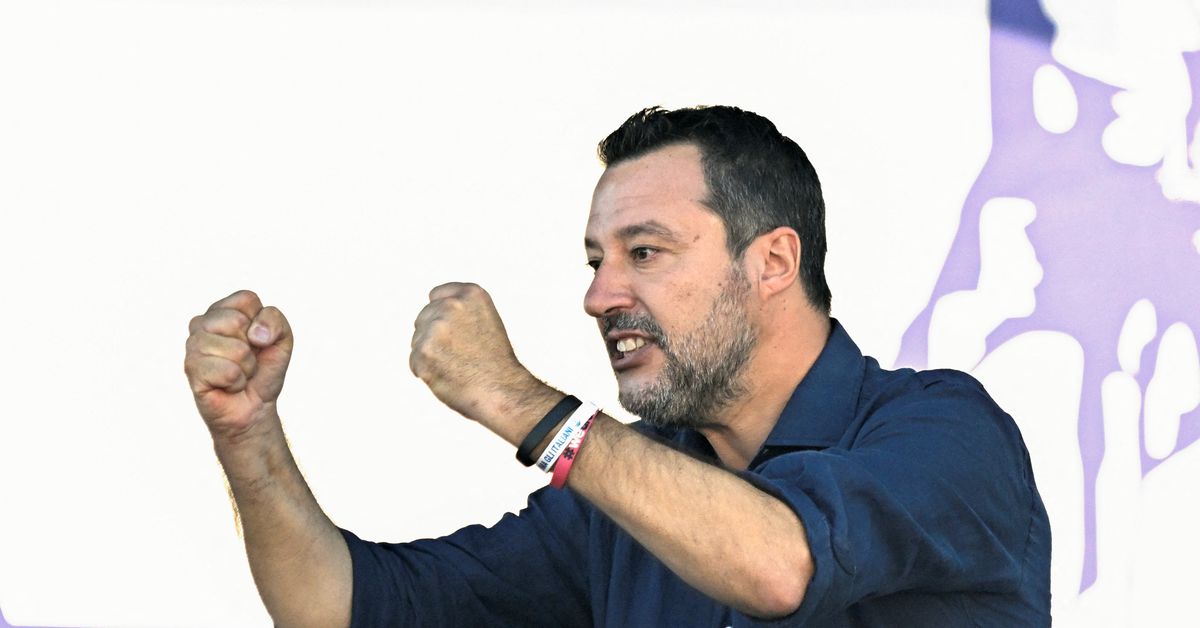 The rightist League aims at winning the Italian premiership next week, according to its leader Matteo Salvini, who spoke at Sunday's party's annual rally held in northern Italy.

The 25 September election will be won by a conservative coalition of parties including the League. It will be a bittersweet moment, however, for Salvini, who has had his undisputed leadership of the right eroded by Giorgia Maloni.

Salvini spoke before thousands of supporters, waving flags in Pontida, his spiritual home.

Meloni's nationalist Brothers of Italy party will take about 25% of the vote. The League is expected to get around 12% of the vote. This is down from 34% at a European Parliament election in 2019.

Some League veterans suggested Salvini could lose his position if the vote share drops further. However, diehard supporters have rejected any talk about Salvini's defeat on Sunday.

"They may receive fewer votes, but I am confident that the centre-right will win...and given it is a coalition they'll rule all together," stated Marco Mollica (a Turin-based 39-year-old metalworker).

After a three year hiatus due to the COVID-19 pandemic, the League returned to Pontida where it held its first ever annual rally in 1990.

Officials from the party claimed that a fleet of over 200 buses and trains brought in an estimated 100,000 supporters from all parts of the country each year.

The crowd was smaller than it was in 2019, when 35,000-40,000 people were expected to attend. Two police officers told Reuters that there were approximately 15,000 participants.

The original roots of the Northern League were in the wealthy north. Umberto Bossi, then the leader of the party, demanded secession from the south. Salvini controversially removed the term "northern” from the party's name and demanded the creation of a national force. This decision upset many of the faithful.

Salvini said that the League would be part of the next government if it was elected. This would give autonomy to regions and allow them to decide how taxes are spent locally. The nationalist Meloni has been hesitant about this promise.

He said: "Autonomy rewards those that govern well and assists citizens because it takes off the mask of the chatterers leaving their people in crisis for years and claiming it is always their fault."

Salvini, 49 years old, saved the party from near collapse nine years ago when he assumed control. He replaced the independence battle cries slogans with "Italians first" as well as replacing chants against Rome by insults directed towards Brussels.

His strategy worked, with the League creating a coalition government in 2018 while Salvini was appointed interior minister. However, a series of political mistakes have allowed Meloni, his ally, to outperform him in the polls.

Ministers and regional governors from the League made a formal commitment to give more autonomy to regions and pursue cuts in taxes, energy bills, and other costs at the start of the rally. They promised to reduce the retirement age, to stop immigrant landings, and to improve the justice systems.

Salvini pledged to abolish the €90 tax that Italians pay each year to finance the state-owned broadcaster RAI, and to revitalize small villages by declaring them a tax-free real estate zone.

He said: "Giorgia and Silvio have the same view about everything, almost everything and we will be ruling together for five years."